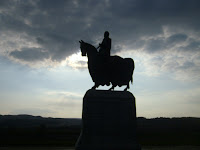 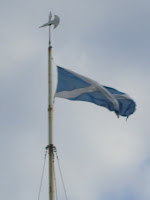 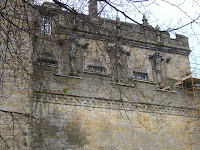 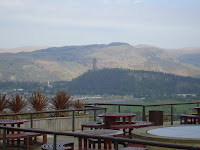 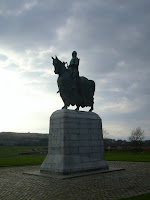 Just back from Stirling where we stayed at the King Robert Hotel and could watch out the bedroom window as the sun set behind the stalwart Rab Bruce and his mighty warhorse. This was a family trip and it was very touching to watch the weans galloping about in the grass shouting WHACK WHACK as they set about English heads with their imaginary battle axes. Bruce's statue at Bannockburn is a noble one and I prefer to think the facial features are a true representation of the great man though I have seen recent forensic research that suggests Bruce looked more like Stan Laurel.
It's depressing to see, however, that the National Trust for Scotland is still making a pigs' breakfast of commemorating this most important and significant of Scottish battles. The tiny heritage centre still shows a crap and amateurish film the colours of which have completely faded and which is narrated by a man who has been dead for about 30 years. I'm probably completely mistaken about this but I've always had a hunch that there is an agenda within NTS to play down places like Bannockburn while pumping lots of dosh into commemorating national disasters like Culloden. This feeling probably orginates from my very first visit to the battlefield when visitors were regaled after the show by a matronly figure in NTS uniform who announced in plummy tones "Of course we're not like that anymore" to which my companion (a man sadly now dead) replied, to my lasting admiration, "speak for yourself you old cow". This was a rather coarse riposte but well deserved nonetheless.
Stirling Castle on the other hand is an ongoing work of great promise and deserves to be Scotland's leading historic attraction. Stirling in general has a lot going for it and it was a bit sad to reflect on poor old Drumsleet, a town with almost as much historical significance but one sunk in a mire of despond.
My plan to regenerate Drumsleet has remained unchanged for the last 20 years. It must be re-invented as a History Town. It has excellent Burns connections already but its role in the Scottish wars of independence (Bruce first proclaimed himself King there after murdering John Comyn across the road from the new pound shop)should be played up and this needs a huge and sexy focus. I don't mean some crap 'Robert the Bruce Experience' where tourists look at some sad waxworks while getting their pockets picked. We must dig up the entire area that bounds Irish St, the High St and Buccleuch Street and excavate the remains of the old Greyfriars Monastery and build some state of the art thing like Jorvik that combines real archaeology and history with imaginative reconstruction to tell the whole story of the Wars of Independence. There would be massive logistical and financial difficulties, I know, but imagine.....
Posted by Hugh McMillan at 9:30 PM

"We must dig up the entire area that bounds Irish St, the High St and Buccleuch Street......"

Steady on, there are a few pubs in that designated area of national historical interest. Let's not be too hasty here.

there are no pubs in that particular area, coincidentally.

I always knew you were a man of vision...I nominate you to be in charge. Then you can ensure old cow guides who want to distance themselves from the messier sides of history are left grazing in the field, where they belong. :)

Very interesting site. I came across it through my news alert for National Trust for Scotland. May I point you and others whose opinion of NTS is as low as mine to our new campaign In Trust for Scotland (www.intrustforscotland.org.uk) which eventually aims to reform NTS and mend its ways?