Anyone in the vicinity of Dumfries is invited to Gracefield Arts Centre at 3.00pm on Saturday 21st February where I am reading my Scottish History poems,probably to the Janitor and his cat as there has been no publicity for this event, at least none that I have seen. Better people than me have read to the Janitor's cat, however. I am told by the brilliant John Manson that James Joyce once gave a talk in nearby Annan to which no-one at all came.
Posted by Hugh McMillan at 9:44 AM 4 comments:

A walk at Caerlaverock 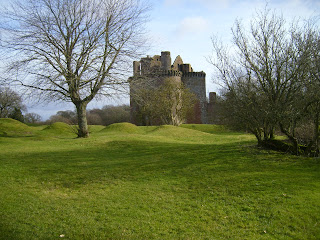 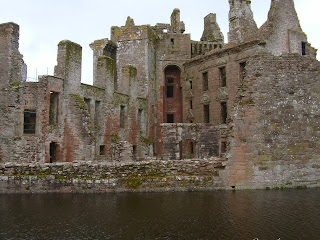 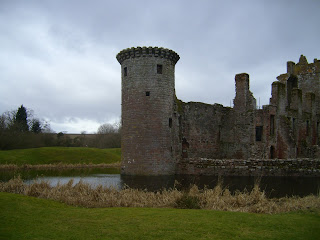 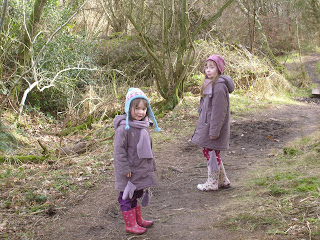 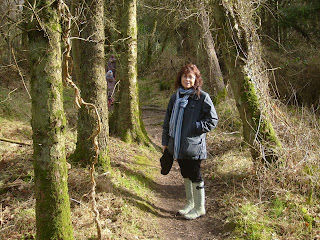 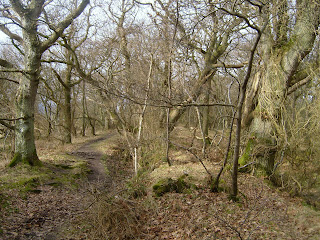 A mild day, taste of Spring. Walking from the nature reserve at Caerlaverock on the Solway Firth to the castle, famously besieged by Edward 1 in 1300, then blown up in 1640 at the beginning of the Civil War. Caerlaverock's a Welsh word, a relic of the area being part of the ancient Kingdom of Strathclyde. In the background over the estuary of the Nith is Criffel (named by the Norse Vikings- Crow Mountain). And on the other side the iron age fort of Wardlaw. This was a major crossing point from the English side of the Solway, so there's a Roman harbour here, too.
Posted by Hugh McMillan at 5:45 PM 8 comments:

Keep off the Moors 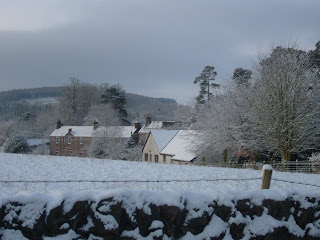 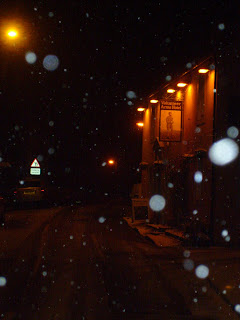 Much terrified speculation here about the provenance of huge footprints spotted in the recent snowfall in fields near the village. This, allied to a disembodied groaning sound at night and the disappearance of two popular local yorkshire terriers, has led to rumours that a supernatural beast is stalking the area. People have adopted extreme precautionary measures, roping schoolchildren together and only travelling by those sheep tracks well lit at night. Also local yeomen armed with garlic bread and staves patrol the woods till dawn.

I can now reveal to the anxious population that the phantom is, however, none other than one-legged thistlemilk entrepreneur Theosyphilis Neill, brought back to life in an unnatural ceremony by his lodger Terry. Popularly supposed to be slow and cumbersome, the one legged Theosyphillis can actually cover huge amounts of ground very quickly using an experimental prosthetic salvaged from ex-territorial army cyborg killing machine MacDuff of Clatteringshaws. Sensing that a wallet is about to be opened Theosyphillis can lope across vast amounts of territory and materialise at the scene within seconds, the sentence "do you think you could just lend me a fiver till Monday?" or "it's my big cheque a week on Saturday..." or "just a pint then, I've hopped all this way" already half formed on his peculiar countenance.
Posted by Hugh McMillan at 11:35 AM 20 comments: 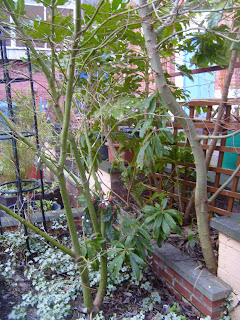 There’s a garden in the heart of the school,
vanished under the lidless gaze
of a hundred empty windows.
A quadrangle it would have been-
the cherry tree quadrangle-
now two walls are lined by skips,
broken brick, benches rotting in the sun.
Years of tinkering by children
too green fingered for exams have spawned
a thumbnail patch of feral orient here.
Palms and fronds loll from fat pots.
Trellis dry as tinder sags with acer and bamboo.
Ivy tongues stone and the little plaques
that remember the dead.
Below the willow, a map of the world fades,
weeds splitting continents,
and cherry blossom is everywhere,
fragrant and lost, like wasted time.
Posted by Hugh McMillan at 3:04 PM 6 comments:


Having arrived like a blast of janwar win, Stuart Paterson has departed southwards, my liver waving him a fond farewell at the border. Paterson is a fine poet whose voice has been stilled these last eight or so years. Let's hope we hear it again as he is a rumbustuous and thorny fellow who writes with insight, flair and humour. I'm sure he would not mind me reprinting one of his poems here to show what we're all missing.

chunder wildly near to where we are,

mindlessly. Above, no gulls

but there's a feel of Scottish

just beneath the picture perfect

skin of greens, blues and browns.

Perhaps it isn't where we are

but where we were in certain

for a moment only, whirring

on a ferry slowly going