Suppertime again. Fatten your haggis. Rattle your shortbread tins. Time to think again about the humanity and resonance of Robert Burns while looking askance at the cult that's grown up round him which debases his message. There's nothing more annoying than a roomful of rotarians pretending to like poetry and the universality of man.

According to him, the cult has..

"denied his spirit to honour his name.
It has denied his poetry to laud his amours.
It has preserved his furniture and repelled his message.”

My favourite Scottish poet, Willie Neill, gone to earth in Galloway, put it even better:


“Once a year, Robin, they will remember you
in a word or two beyond your actual name.
The fatuous speeches will scarcely encumber you
the maudlin tear, the exaggerated claim.
Who love what you love measure your true fame
in a kind of silence the foolish find too great.
They take your measure by their own puffed state.”

Anyway, where better than the Coach and Horses, where Burns drank and where Burns' own hero Robert Fergusson once drank, to go tonight and have a malt or two in memory of the man? Maybe see you there.


In St Michael’s they are filming Burns.
The sun fires shafts of dust
as soundmen scuffle and static screams.
The Rev points cameras to
the all-important pew:
empty but Rabbie will be reconstituted later,
like a burger, from scrapings on the studio floor.
Dignitaries preen and groom,
but along the way, in light hurled through
deep green glass, a young girl sits alone,
her flame hair bent as if in prayer.
Beauty and bedlam:
a commemoration after all.
Posted by Hugh McMillan at 1:59 PM 1 comment:

http://www.youtube.com/watch?v=Khrpy4V0-U4
Posted by Hugh McMillan at 3:56 PM No comments:

I spend quite a lot of time listening to the Home Service as they used to call it, and in the mornings they have been airing the short-listed poets for the TS Eliot Prize. Now this being nearly the time when we remember Supperman , Robert Burns, and his amazing gift of tapping into the spirit and feelings of the common man in a highly accessible and humorous way, it led me to think about what seems to constitute good poetry today because, call me a philistine if you like, I’m buggered if I could understand much of what was being being read out. Of course, you need to look at the poems properly, on the page, but sad to say- and I repeat this is probably a reflection of my own stupidity- with some of them this does not seem to help much. Even Ian Duhig, an old friend and a man who helped fish me out of a canal in Galway City after an ill-fated encounter with the self-styled ‘Bard of Poteen’ at the Cuirt Literary Festival, seems to be operating for at least some of the time on strata pitched pretty high above my head. This leads me to think what is the point of writing the stuff if people can’t understand a word of it? The beauty of poetry is of course wordplay, association and image, but surely if it’s so multi-layered and arcane that you need a Doctorate to unravel it, we are saying that poetry is less an art form that the public can associate and empathise with and more an intellectual exercise restricted to and appreciated by a tiny minority. What seems disturbing is that the arbiters of what is counted ‘good’ poetry seem to be reinforcing this polarization.
Posted by Hugh McMillan at 10:44 AM 2 comments: 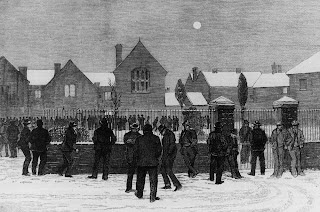 The winter has been dank and full of unpleasant surprises but I’m encouraged by the sunshine today which brings a hint of better things to come. I have been keeping my spirits up by visiting the destitute in Drumsleet, one of whose number is, of course Theosyphilis Neill who, having broken his leg for the sixteenth time at New Year, is now a permanent guest of the parish. It is a shame to see a man who once used to send a taxi 20 miles for a case of fine wine to see him through an evening, so fallen on hard times. When I visited him in the workhouse he was a wretched figure, sitting quietly with two other tootlhess old men and knitting a gigantic muffler, presumably to keep the three of them warm in their garret when the snows return. When I inherit the fortune from my Uncle Archie’s Australian lap dancing empire I shall make a point of setting Theosyphilis up in one of his favourite old business concerns, perhaps drug running across the Solway by hovercraft.

A fantastic and long review of Strange Bimbo in the ‘Dark Horse’ arrived this morning. I quote: “McMillan is the real thing…his poems reassure one that poetry is still a free space for the inner life uncompromised by commercialism or by emotion sanitized by respectability. They have the bite of anger, but also that gentleness in us that wishes sadly, and sometimes desperately, for things to be other than they are.”

I’m off to Durham at the weekend to read at Colpitts Poets, which I’m looking forward to. I read there once before when Bill Herbert was writer in residence, and it was very jolly and hospitable. Have to be at a telly by early Saturday afternoon to witness the resurgent Hibees thrash the jambos in the Edinburgh derby, however.
Posted by Hugh McMillan at 2:09 PM 1 comment:

Silhouetted by the last cold light,
the stubble of trees on distant
double chins of hill
and nearer, branches flung
wide and bare
like casualties of war.

Everything waits-
it is the still season- the knots
of frozen schoolkids,
the traffic crawling homewards,
even the sun, pale and hesitant.
The world is in abeyance.

Behind our tinsel and bulbs
we peer at the night,
stark and silver in fields
and corners beyond street light,
and fear easy, endless magic
when the year dies.
Posted by Hugh McMillan at 2:46 PM 2 comments: