Arise Sons of the Selgovae

Great recent news about successes for Dumfries and Galloway writers. Hugh Bryden's Roncadora Press has been shortlisted for the Michael Marks Publishers Prize, as well as being on the Callum MacDonald shortlist for Jean Atkin's beautiful pamphlet 'Lost at Sea'. JoAnne McKay appears too for the lovely 'Venti'.

D and G has a growing list of nationally recognised writers, an imaginative and energetic new publisher, good venues, thriving writing groups, one of the best poetry festivals, and a new and ambitious magazine in Southlight.

The successes are partly down to a succession of very good literature officers, but also as a result I think of the place itself, its history, its strange mix of the wild, the agricultural and the semi-urban. Is there a homogeneous Dumfries and Galloway voice? Nope, but then there never has been. Loads of people are born here, or come here and make stuff up. Sounds good to me, and not just in terms of literature but the visual arts, music etc. We're on a roll, ladies and gentlemen. Or should I say ladies?

One problem that needs to be addressed in terms of literature, certainly poetry, is lack of men in the area, especially younger adult men, who see writing as a valid way to express themselves. They do at school, plenty of boys in 'The Kist' and the Moat Brae Anthology 'The Grass Cloud' for instance, but then they seem to stop. Wonder why? Is there a stigma? Or have we created a situation where the 'male voice', if there is such a thing, is unwelcome? Has poetry gradually become the preserve of women? I remember a poetry review where Kate Clanchy reviewed three male poets in tandem, as if they weren't individuals, but rather three parts of the same rather embarrassing and unsavoury whole.

Any hope for the 'Sons of the Selgovae'? Discuss.
Posted by Hugh McMillan at 9:18 AM 5 comments: 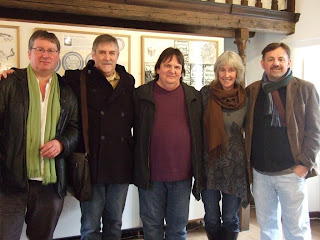 Roncadora are a family firm purveying mutton pies, butteries, mince rounds and bread and butter puddings. The present board of directors, photographed here, pride themselves on providing high calorie fare for the most discerning of palates. "There isn't a waistline here under 40 inches" stated Managing Director Hugh Bryden, "apart from the Atkin girl and she's only just started. We'll soon get some lard on her."
The Roncadora Roadshow, featured recently in the St Andrews Pastry Festival, is appearing, courtesy of a specially reinforced bus, at a venue near you soon.
Posted by Hugh McMillan at 9:50 AM 6 comments:

Forget the teletubbies. Look at the mess my room is. And that's it tidy. 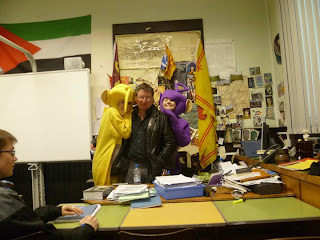