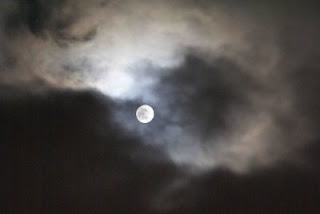 
My breath is white.
It’s wintertime:
more than weather
it’s the ghost of hunger,
small sounds in the night,
a strangling of light.

I walk through haar,
through the town’s cobbled crust,
past smeared shadow,
mirrors in green glass. As I go,
halos of lamp turn to will o’ wisp,
neon to bonefire.

Moon cracks cloud
and the clock face freezes.
I burrow in a guise
no wraith will recognise,
professional, of Dumfries,
out for an hour.

Back to Work, I fear. Hectic holiday in Majorca, followed by readings in Edinburgh and Stirling. Have some treats to share, particularly a video of the mini Euro-Disco Lyd and Jaz attended every night while on holiday. In the meantime, poorer fare, two poems that came out of that week. 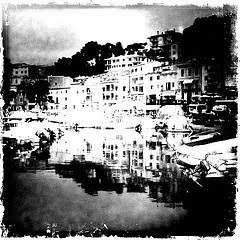 
Fronds hung with water like rope.
The raindrops are fat and white as opals:
I see a face in them,
framed by sky the colour of iron
and shredded cloud.

It is good to be off your head
somewhere new, where even the weather
has a different slant, fast and loud
and desperate to get to ground.
No lack of words:

the sea has no end and talks long
into the night like a mother tongue.
I sit and drink and watch the rain
while my girls, happy in any migrating,
sing like birds. 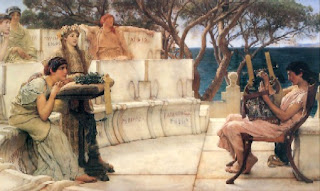 Poetry Doubles, Lesbos
(After the painting by Lawrence Alma-Tadema)

Did you know Jimmy Hendrix pished on this lyre?
I’m behind it, hiding from those eyes of hers.
We’re in the annex of the Aesculapius Memorial Theatre
as Ovid’s got a translation of Rab Wilson next door.
No crowd in here, just some eco-poets from Santorini,
and my pal Alcetes at the back, drunk again.
Who’ll win the famous laurel wreath? Not me
with my smut: In Aphrodite’s Isle always,the girls win.

I’m hurling love’s bolt smoking like the sea,
but he’s got a sidestep like James McFadden
and he’d sooner kiss a glass than me,
claims drink’s part of his religion.
So’s love, I say, but he’s either steaming
or singing comic songs about boats,
talking of which, I note,
the last one’s gone. In Aphrodite’s Isle always, the girls win.
Posted by Hugh McMillan at 10:27 AM 7 comments:

And what better way to celebrate than with my hero, Iain Crichton Smith?


It neither was the words nor yet the tune.
Any tune would have done and any words.
Any listener or no listener at all.
As nightingales in rocks or a child crooning
in its own world of strange awakening
or larks for no reason but themselves.
So on the bus through late November running
by yellow lights tormented, darkness falling,
the two girls sang for miles and miles together.
and it wasn’t the words or tune. It was the singing.
It was the human sweetness in that yellow,
the unpredicted voices of our kind.
Posted by Hugh McMillan at 10:26 AM 4 comments: 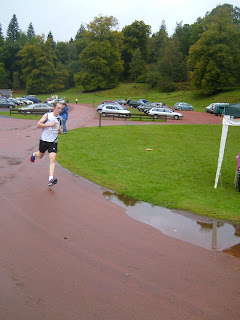 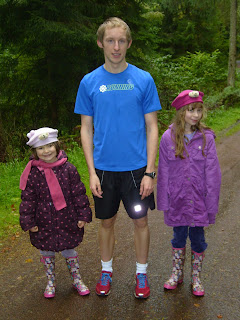 Lots of stuff at the weekend. Firstly, read at Wigtown on Friday evening to a packed house in the MacNeillie Tent which was very good. I had convinced myself no-one was coming, to the extent that I'd even cajoled Theosyphillis Neill to risk arrest by crossing the county line, but I needn't have worried cos they kept pouring in. Reading for an hour is a hard business, though. Next stop launch at the Scottish Poetry Library on Wednesday October 20th, then reading at the Stirling Centre for Poetry on the evening of the 21st, then St Mungo's Mirrorball in Glasgow on November 25th.

Also rare visit from Andrew my son who took part in the Drumlanrig Demon 10k and came a creditable second place. Sisters delighted to see him, needless to say.
Posted by Hugh McMillan at 3:18 PM 3 comments: