A Monday morning, and just finished my stint at one of Scotland's newest festivals, the Big Burns Supper in Dumfries, reading McTaggart and some possible extracts from this book on the Saturday and then, along with the poet Stuart Paterson, doing my own poetical response to the Bard on the Sunday. In between times, I was whisked by Burns Helicopter to Gatehouse for a poetry reading there. Great fun and liver bashing all round.
The parade in Dumfries, involving lots of weans who had created their own masks and giant puppets and formed their own drumming bands, was lively and dramatic and the town was buzzing in spite of the fact that for the second year running the weather did its worst to screw things up. To my eyes, most of the faces were locals delighted to be having acts like Big Country and Dick Gaughan on the doorstep and thrilled to see the town coursing a wee bit with unusual electricity. All three of our events had strangers and some kent faces in the audience and went well . Sometimes the creative life seems compelling. Sometimes. 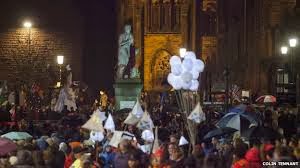 On Sunday's events we read our poems by Burns and about him. Because I’m twisted and had just heard that a fellow poet was on a beach in Africa having been flown out for a ten minute role in a Burns Supper, I read my poem Suppertime.

It’s that time again:
erubescent men are boarding planes
to Fiji and Azerbaijan.

They will blow east and west
on airs of malt. The world will be
necklaced by these ambassadors

preaching love of literature
and other stuff they say
they understand, or even claim

their nation has invented,
things like passion and equality,
humanity and pride.

it explodes like this once a year.
The rest of the time
these man are sober

rotarians. Unionists. And that apart,
wouldn’t know a poem
if it bit them on the arse.

After that we rolled up to the Globe snug and witnessed Jane Brown, currently President of the World Burns Federation as well as the Globe's landlady, reducing the whole experience of a burns supper into manageable, and profitable, ten minute packages. I was totally impressed, and after it, felt compelled to read poems to a couple from Lochgilphead, even after they were clearly bored.

The Big Burns Supper is an attempt to regenerate a town whose unique association with  Scotland's most charismatic artist has always seemed to me both a curse and a blessing, and do it through art. It seemed to me, and mine was certainly not a scientific survey, that the community or at least a part of it was enjoying it hugely.

Maybe it was guid scots drink.

O Whisky! soul o' plays and pranks!
Accept a bardie's gratfu' thanks!
When wanting thee, what tuneless cranks
Are my poor verses!
Thou comes-they rattle in their ranks,
At ither's arses!

Fortune! if thou'll but gie me still
Hale breeks, a scone, an' whisky gill
An' rowth o' rhyme to rave at will
Tak a' the rest
An' deal't about as thy blind skill
Directs thee best.

Under the influence of strong drink, and under the roof of the man himself's favourite pub, it was hard not to be suffused by a general bonhomie and believe maybe that in the face of all the evidence, it is actually comin yet for a that.
Posted by Hugh McMillan at 7:46 PM No comments: 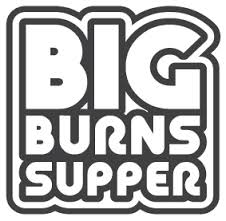 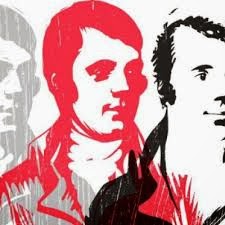 I'm engaging in  a few events to try and spread a bit of awareness of my project. As you know, I've been commissioned by the Wigtown Book Festival to write a sequel to the funny and notorious 'Gallovidian Encyclopaedia' written by John McTaggart in 1824, a hilarious and partly slanderous work which was withdrawn from publication as a result of the furore it caused at the time.
Im going to hold a regular series of events across the region introducing people to the work of McTaggart and revealing some of my own eccentric vision of the region today. I'll be appearing in regional libraries from the middle of February but in the meantime you can catch me first on Saturday 25th January upstairs in the Coach and Horses at 3.00pm as part of the Big Burns Supper Festival. Entry is £5.
Immediately after that I'll be whisked by Burns Helicopter to Gatehouse of Fleet to appear with Stuart Paterson at the fabulous Bakehouse for their Burns Night Celebrations.7.30pm.

http://www.thebakehouse.info/
Posted by Hugh McMillan at 11:01 AM 2 comments:


Here's a thing. I'm standing in a muddy field one late afternoon. I've been diverted from my walk along the main road from Penpont to Thornhill, (a walk necessitated by the unnecessary closure of the historic Volunteer Arms in Penpont, though I may have mentioned this before) by a monument that no-one seems to care about but is quite remarkable. I'm nearly always diverted by it, trying to catch it when the sun is sliding across it for good photos or to best make out the carvings, because there are carvings, amazing zoomorphic shapes of winged beasts. It's remarkable for a lot of reasons but one of them is that nobody seems to care about it. No protective glass panels for it like the Kirkmadrine stones, or interpretation boards to tell us what we're looking at or what we should be thinking. The locals tend to think it’s a monument to people who lost their lives in an accident here, on the ferry that used to run before the was built. 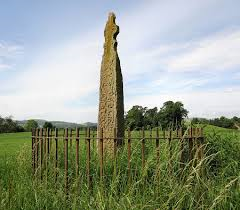 The truth is also remarkable because it dates from the 10th century and is the Ruthwell Cross’ poor neglected scabby cousin, a Northumbrian cross shaft, its bestiary of carved symbols and bible stories being slowly eroded by wind and rain, its warm stone turning smooth as a plum.

What it's doing here I don't know, but this appears to be its natural location. Its neglect is a history crime, but I also can't help thinking how romantic and lonely and enigmatic it is standing here with its necklace of rusty fence, and a backdrop of fields and gentle slopes and torn pink and grey sky furling round the dark fortress of Tynron Doon.  It seems a suitable sentinel for that strange quasi island between the Nith and the Scaur that I call home.

Leave the world between bridges:
the narrow one across the Nith
with its sentry box and the old
crossing at Scaur squatting on its Roman haunch.
There’s a shaded cup of fields between the bridges,
moss and trees darkened on every side by hills.
The royal holm is here where Bruce camped on his way
to heaven via Whithorn, and Penpont, still scratched
on maps after seven hundred years. Penpont,
an island, and The Nith Stone, totem of this pagan space.
Rain has swept the dogma from its sides
and smooth as a grape it stares from a bright clasp
of weeds, sizing up visitors and their burdens,
daring them to stay for a night here
in the blaze between the bridges,
below our thin, bright slice of moon.

It's also a kind of totem pole for the forgotten landscape. Children, let us do a creative writing workshop standing here, ankle deep in glaur. Place your hands upon this cold stone and trace the carvings. Take your earphones out, Daytona, there is a place for Pixie Lott but this is not it. Take a deep breath, extend your arms against this chill January sky, imagine, imagine, imagine.......

S for Stagecoach, an exerpt

Stagecoach- Once a hugely expensive, uncomfortable, unending and unreliable way to travel between destinations, and still is. I'm not talking about particular companies here, just buses in general. My ire while writing this is fuelled by standing in a bus shelter for three hours last week in sub-zero temperatures, my only company being a man with a huge slowly freezing drip coming from his nose and the electronic display, installed at massive expense by the Regional Council, which instead of saying something useful like ‘your bus is 40 minutes late/been cancelled/ or whatever, insisted instead on wishing me, repeatedly, a Merry Christmas.
Coach transport has always been tough.

“When the Marquis of Downshire attempted to make a journey through Galloway in his coach about the year 1760 a party of labourers attended him to lift the vehicle out of ruts and put on the wheels when it got dismounted.....when within 3 miles of the village of Freetown near Wigtown he was obliged to ......pass the night in the coach with his family” 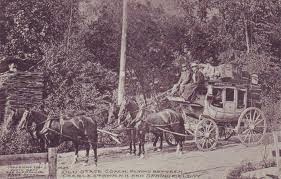 I’ve often sympathised with the Marquis of Downshire, especially when sitting at the side of the road in a bus after the alternator’s packed up or the doors blown off, or a tree has tumbled across the road. I’ve never driven, as poets don’t drive, everyone knows that, so I judge myself an expert in public transport. Why should everyone need to have a car to live in the countryside?

Rural buses are a lifeline but the service is poor, though the drivers are often, though not always, men and women of great humanity and kindness. If you depended on the buses completely, though, you would evolve into a creature with no social life past quarter to five in the evening. I have thought this more keenly since my local pub shut down and often, at a bus stop, think of Henry Thoreau’s words, “It would be some advantage to live a primitive and frontier life, though in the midst of an outward civilization, if only to learn what are the gross necessaries of life and what methods have been taken to obtain them”.  I have a theory that in the centre of all this technological advance, some of the population are, through poverty or remoteness, living a medieval life, or a medieval life with some mod cons. Some folk embrace this lifestyle, of course, and become rekei therapists but most are just trying to have a decent life.

Difficulties in rural transport encourage depopulation and foster the ghost landscape. Mind you, there’s another way of looking at it. I was having a conversation with a young man about to leave school in Newton Stewart, but who lives some miles from there, and the talk got to buses. I was saying what a shame it was that there weren’t more services and he said “aye it’s a conspiracy to keep us here, they don’t want us to leave. Even the ones you get take you round in circles.”

It’s true of course. I used to get a bus that took 50 minutes to travel the 13 miles to , and half an hour into the journey we were further away than when we started. There’s an inherent symbolism in the Region’s bus services which should not be underestimated.

We butt into the countryside.

Posted by Hugh McMillan at 11:46 PM No comments: