The sun’s a loophole,
a peach in the breeze,
and haze like smoke
hangs between trees.

They sense it, all living things,
shoppers, weans and nutters,
they’ve a spring
in their step, a valve’s unshuttered;

nature is nudging them
to tiny acts of mayhem.
Posted by Hugh McMillan at 12:33 PM 9 comments:

Spider's Spin On It 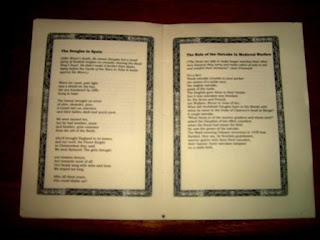 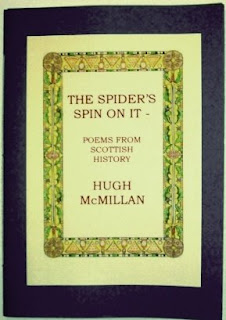 Just back from Stanza- bagless, unhappily. Who will inherit my smelly socks, flog the first draft of 'The Role of the Oatcake in Scottish History' to the university of Texas after my death? I enjoyed Stanza in my own way and I may write more on this later. Let me announce to the anticipating millions, however, the new project, 'The Spider's Spin On It': Poems inspired by Scottish History. Illustrated by the incomparable Hugh Bryden, this booklet is a mere 8 squid. You can buy one at one of the launches in April or May- watch this space- or by poking my button, yes that's it just there on the right, up a wee bit, uh huh..

(“It was once thought that artisans and Scottish soldiers’ wives, seeing the tide of battle turn in favour of the Scots at Bannockburn, tied blankets to poles and rushed down Ghillies Hill to join the fray. Modern scholars doubt this.”)

Ave heard it tell we werenae there
but we aye are;
close as craws to sodgers
an the reek o’ bluid.
We’re sma’ but we cover the groon
like haar,
thieves, hoors and ither scum,
bone-pickers.
Dad’s Army we’re no,
but we won the battle, a’ richt.
We aye dae.
Posted by Hugh McMillan at 2:46 PM 8 comments: 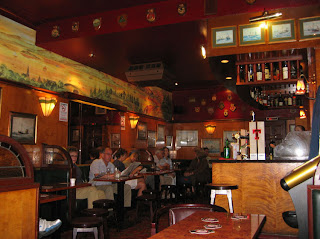 Time was there seemed to be 3 poets in Drumsleet, The Makar Tom Pow, the beautiful Liz Niven and myself, as well as one short-story writer called Pete Fortune. This seemed an excellent and balanced arrangement, almost dictated by natural law; a senior, respected figure, a wumman, and two drunkards who'd spend a lot of time in the pub complaining about Tom being better known, and Liz getting more work. Occasionally we would be joined by Vinnie McWhinnie if he was out of prison.

Now there are poets everywhere. The taxi driver's a poet, the postie's a poet. There's even a talented poet living 3 doors down from me in the tiny village of Brigadoon. Many of these poets- though not all, I stress- are women of a certain age who have suddenly arrived, fully formed, with their own chapbooks. They are square jawed and determined. They win competitions. They have not served an angst ridden apprenticeship in the back of the Lyver. They shun alcohol. They are a formidable fighting force. I blame The Great Makar's highly successful creative writing courses at the Crichton Campus for the ongoing mass production of these poets.

I have a deep suspicion about anyone who does not at least occasionally drink. But a POET who does not drink? For God's sake, this is a violation of the natural order!

I am told that one of this species recently and publically repudiated the tradition of "local poets with their drink problems". It is a sad day for us, though I would describe myself, at some points in the 1980s as, in the words of Max Houliston, less of a poet with a drink problem and more of a drunk with a poetry problem.

Unhappily the furore has driven Pete Fortune from his muse. McWhinnie is trying sculpture in his Open Prison. The Great Makar is in Transylvania, or Venice or Shanghai. Only I walk Drumsleet's forgotten ramparts......
Posted by Hugh McMillan at 1:48 PM 10 comments:

I always thought Martin Amis and I have a lot in common. He thinks poets don't drive, so do I. He had completely crap teeth, so have I. He invented a minor and unsuccessful poet (in 'The Information') called Horridge, one of the publications of this minor poet was called 'Horridge'. See? Uncanny isn't it? I suppose you could say there are some minor places where our lives have diverged- eg he's rich, handsome and successful- but all in all I think there's conclusive evidence to suggest that our destinies are intertwined.

I am shocked therefore to receive a postcard from his secretary this morning saying he can't possibly reply to my many letters because he's in South America and isn't coming back for the forseeable future. This is obviously a lie. It reminds me of a section of Ian Crichton Smith's retiral speech where he told his colleagues that they were all welcome to visit him though he "lives up an inaccesible farm track and is nearly always out."

Anyway this brings me to the point of this post, Iain Crichton Smith, whom I suppose you could say was my only real poetical mentor. He wrote the blurb for Tramontana and we corresponded until his death, mostly on the subject of C John Taylor, founder of the warehouses of the so-called West Highland Arts and Crafts and a man whose painting and poetry was, in both our opinions, truly abominable. Iain wrote once that "Taylor's Pieta looks more like a Pizza."

Iain Crichton Smith was born in Glasgow in 1928, to parents who were both from Lewis. He is one of the most important writers in English and Gaelic in the 20th Century in Scotland. Best known for his 1968 novel Consider the Lilies, he wrote more than fifty books, several hundred poems and short stories, several stage plays, screenplays, and radio dramas. Smith grew up in the small village of Bayble in Lewis, which was also home to the Gaelic poet Derick Thomson. He studied at Aberdeen University, before training as a teacher. Eventually, he got a job at Oban High School, where he taught until retiring in 1977 to become a full-time writer.

He wrote beautifully about the human condition often with the penetrating insights of someone who had himself experienced deep doubt and depression. His poetry is often lyrical and heart stopping.

The owl wafts home with a mouse in its beak.
The moon is stunningly bright in the black sky.

Such a gold stone, such a brilliant hard light.
Such large round eyes of the owl among the trees.

All seems immortal but for the dangling mouse,
an old hurst strung among the harmony

of the masterful and jewelled orchestra
which shows no waste soundlessly playing on.
Posted by Hugh McMillan at 5:19 PM 9 comments:

The Blessing of Unicorns 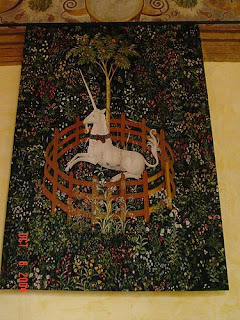 (Unicorns, the heraldic supporters of the
Scottish Royal Arms, could only be captured
it was said, by a young girl.)

In a rich blaze of green
a girl sits, the golden veins
of her dress tucked between
two neat shoes like ballet
pumps. The sun has burst
in the sky, leaves gleam
like blades, and the grass
curls, hot and hard as flame.
The others have long left
the wood, peer out between
the deep folds of cloth.
No one foretold this scene
or dares to stay inside,
see innocence and magic collide.
Posted by Hugh McMillan at 8:51 AM 6 comments: