And so the months passed....

Two new books folks. When I recover the knowledge of the ancients I shall put them up for sale to the right of this page.

I'm not going to attempt to summarise what's happened since December 2015 though highlights might creep out. Talking of creeps I am regaled this morning with pictures of the folically unchallenged Neil Oliver, sneering at the case for Scottish independence in an unashamedly adolescent manner. I wrote a section about Neil in 'McMillan's Galloway' which was far too kind but I reproduce it here, by way of a cheeky advert for the book.

Examining one of the panels of the ancient Knockhill Cross, it is clear that the figure near the Archangel Gabriel depicted with long hair and a microphone, is Neil Oliver, the historian with the best hair on television, even more beautiful than Walter Scott's Helen of Kirkconnell:

O Helen fair! beyond compare,
A ringlet of thy flowing hair,
I'll wear it still for evermair
Until the day I die. 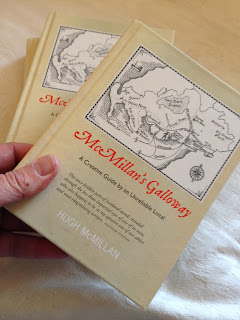 Neil is an ex-pupil of my old school Dumfries Academy where, so we are told by his agent, ‘his love of history was born’. As well as having hair, Neil is a great walker and has starred on TV tramping coastal paths round many countries that have a coast, like Scotland, Ireland and now Australia. My coastal walking is not as good as Neil’s, and in fact only consists of a 22 mile hike done in the dead of night while completely drunk in Mull after my glasses had been buried in a landslide, but even that small experience has filled me with admiration for Neil’s achievements as well as those of the TV crew who will have to trek the 35,846 kilometres round the variable coastline of Australia with heavy equipment and products to maintain Neil’s hair in its good condition. Going at the pace they were in the programme I saw , they should be finished when Neil is 107 years old, in the year 2074, the year which is, coincidentally, the 250th anniversary of the publication of Mactaggart’s Gallovidian Encyclopedia. What an achievement that will be.

Of course walking long distances without thought to fatigue is a well-established tradition in Dumfries and Galloway. The old Well Path from Durisdeer in Nithsdale north is thought to be the pilgrimage route that linked the south, ultimately Whithorn, with Edinburgh, Dunfermline and other royal centres. It’s also where ‘men of pairts’ would think nothing of walking to university in Edinburgh or St Andrews from their homes. Alexander Murray for instance walked to Edinburgh from Minigaff to become eventually Professor of Oriental Languages in St Andrews. Joseph Thomson, the famous explorer, was famous for his pedestrian activities. His brother noted in 1882:

On the hottest day of summer he walked from Gatelawbridge to the top of Criffel and back, a distance of 55 miles … indulging cheerfully in a dance on his return.

And  not a hair out of place.
Posted by Hugh McMillan at 1:22 PM No comments: