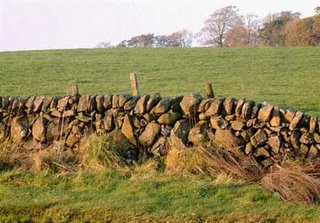 I return from Menorca to find that Willie McMeekin, ex-desert rat, drystane dyker, carpet bowler and general all-round character is dead. I was once commisioned by the Arts Association here to do a piece on a larger than life figure and Willie fitted the bill in every way. For the 30 years I knew him, Willie was proud, clever, hilarious and, in equal measure, an utter rascal. His tales were endless, fascinating and a genuine bridge to a rural past that you can only see now in history books. Newspapers only dwell on the deaths of the 'great and good'. I thought Willie both great and good and take solace still in his perennial parting shot: "The land is ours!" here's the poem I wrote about him all these years ago:

“Drunk or sober,
yon man could pit a carpet boul
or a keystone richt oan the button.”
Willie is nodding modestly
in the Fleshers’ Arms,
70 proof, if he’s a day.

Willie doesn’t age.
Like his dykes, he weathers.
He hasn’t lost his hair,
but mislaid it in an absent minded way:
it’s strung up there somewhere
on the rich topography of scalp
as thick as ever, but vitrified,
as impenetrable as his handiwork.

Below it, creases run
through the skin
like dry river beds.
There are hard callouses
round the smile
that defines and defies his history.

His face is a map
and like all landscapes
is variable.
Willie hasn’t always been good.
I think he predates such concepts.
He is both sides of a very old coin.
The man is Galloway.
Posted by Hugh McMillan at 9:40 AM 4 comments: